This is already my second project in the series: after a few months I guess we could say Mission accomplished, but let’s start small.

It all started with a rather poor idea to use the interiors of the museum in Wdzydze Kiszewskie for a stylised session with models sporting something that was supposed to look like 19th century attire. Well, I did tell you the idea was lame. But back then we liked it, at least until we started talking to the team from the Museum. Five minutes ago it didn’t appear to be so good and its attractiveness kept diminishing with every minute of our meeting as the new idea, much closer to our heart, formed. The new idea was to really go back in time to the turn of 18th and 20th centuries, to the times when the lives of common people didn’t really interest anyone and to create the pictures that should have been taken back then but were not as no one cared. The first test, very successful I must say, was the Gone but not forgotten project in which we brought back to life the real Kashubian people with their daily pursuits and customs which we then immortalized in over thirty oilprints. As soon as I pressed the shutter release for the last time, however, we already knew that this was not the end but actually a beginning, a good start. It was then that we decided, together with our friends  the Museum, that the next session would be more demanding, more disciplined when it comes to the subject matter, that we were going to try to recreate the old wedding customs. What we didn’t know at the time though, was how challenging this was actually going to be. 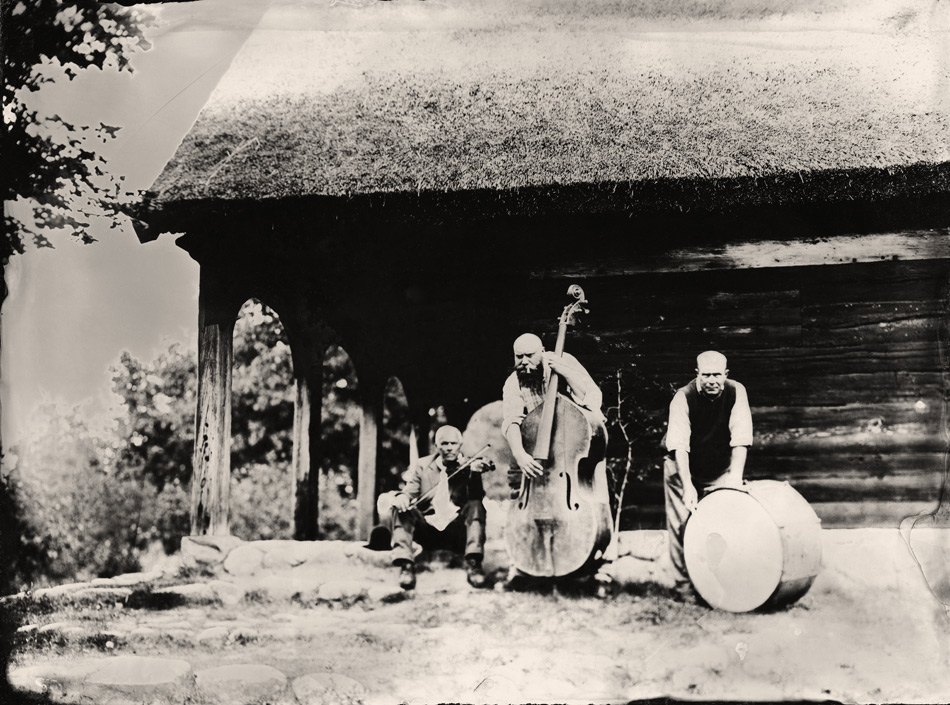 Musicians. Wedding According to Gulgowski

The next meeting came a few months later, at the time we were putting up the exhibition summing up the first part of the project and it was then that the next challenge started taking real shape. First of all, we knew that the next shoot was going to be about a wedding. Or, to be more accurate, not just the wedding itself but the whole event, lasting over a week that we refer to as a country wedding. It was supposed to include all the preparations, making the announcement, the wedding itself and also the party that would follow. We also knew that we wanted to photograph the whole thing using the technology of wetplate ambrotype, the hear and now photography of the 19th century.

The next months were spent on preparations. Contrary to our expectations, the hard part was not to prepare the lab or solve all the technical issues connected with shooting so many ambrotypes in the field, but the recreating of the original clothes and customs of the Kashubian people of that time. It turned out that there were hardly any  photographs and the written sources, to put it mildly, are scant. Fortunately we were once more rescued by Izydor Gulgowski, the founding father of the Museum. To be more precise, the inspiration came from his book “Of the Unknown People in Germany” in which he systematically describes the Kashubians, their customs, clothes, ceremonies and games. What is more, it turned out that one chapter of this book was devoted entirely to wedding. And the wedding was treated there exactly in the way in which we were going to treat it, as an event that constituted a part of the yearly rhythm of rural life defined by the times of sowing, harvesting, adjusted to field work , to times of hunger and plenty. What is more, the wedding was described along with all the accompanying customs, , traditions, customary obligations. In other words we got a nearly complete storyboard for the session. All that was left to do was to convert it into a true story board, create a wetplate lab in the museum, get the models and take the pictures. And that was all. Year. Right. 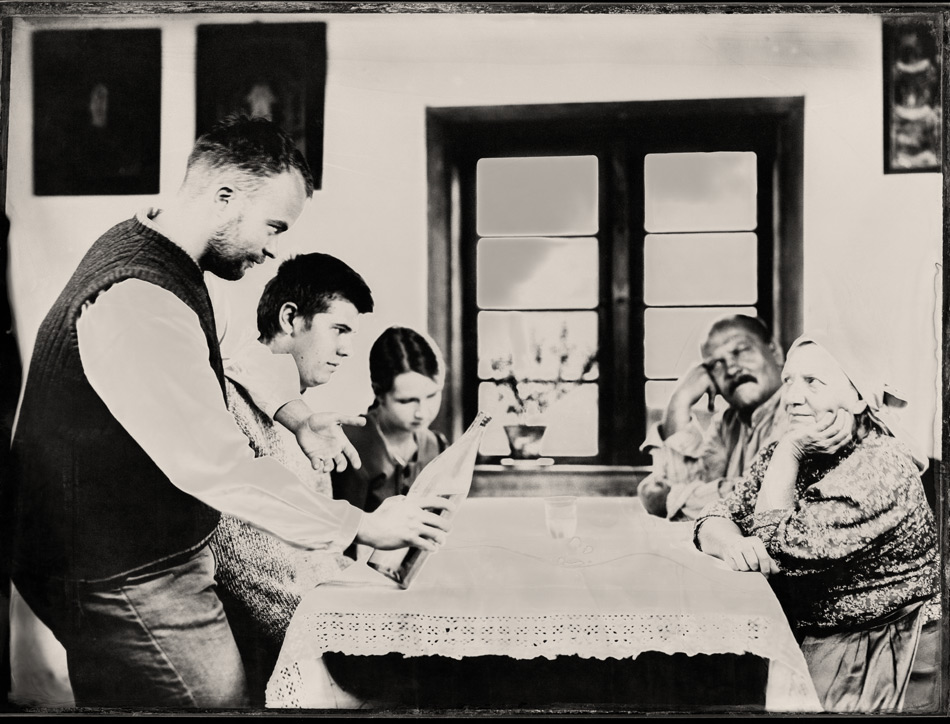 Wedding According to Gulgowski. 18×24 cm ambrotype. Photo by Radosław Brzozowski

The session itself lasted three and half days. Over thirty people were involved; models, assistants and of course the humble photographer. When we finished taking pictures for the day, when Marta, my fantastic assistant in the darkroom could easily claim a marathon run between the darkroom and the place where she could wash the images, rather than rest, we had to start varnishing the plates. Then, there was time for a few hours of sleep and we had to start again. But it was worth it. When all the pictures had dried, when we had scanned them and first of all, when the emotions went away, I can say it was worth it. For anyone interested in the project, here is s short film documenting the project: ttps://www.youtube.com/watch?v=c889h84JoSA

I was also going to say that the project has been finished. But this is not really the truth. It would be much more accurate to say, that it is to be going continued. We already preparing for the next part.

And for the time being, I would like to thank the Museum Teodora and Izydor Gulgowski Kashubian Ethnographic Park in Wdzydze Kiszewskie, especially  Bartosz Stachowiak, Mateusz Słomiński and Iwona Klinger as well as everyone who helped in the shoot. First of all course, Małgosia Bardoń and Marta Grzybowska.