„Kashubian Wedding According to I.Gulgowski” is probably the biggest and most important project I have managed to create. But… Let’s start from the beginning.

We can say, that it all started over a hundred years ago when Izydor Gulgowski, the founding father of the Ethnographic Museum in Wdzydze Kiszewskie wrote his monumental book “Of an Unknown Folk in Germany” as it was this book that finally became our inspiration.

For me, though, it all started some two years ago when, together with the team coming from the Museum, Teodor and Izydora Gulgowscy Kashubian Ethnographic Park in Wdzydze Kiszewskie, we finished work on our earlier project; “Gone, but not forgotten”. We came to the Museum bringing the framed pictures ready for exhibition and… immediately started thinking what to do next. Cause we never had any doubt that a continuation was to take place. And it was then that we decided to create a project devoted to one of the most important moments in human life; the wedding. It was also then that we decided to create those pictures using the wetplate ambrotype. That an album would follow did not even enter our minds at that time.

Gulgowski came sort of naturally. After all, who do you base your work about Wdzydze on if not Gulgowski? And then, we also learn that resources concerning old Kashubian customs aren’t half as rich as we would have liked.

Months of research and preparations followed during which a storyboard was created and decorations collected.

A few monts later, we met again to actually take the pictures. It took three days of intensive labour, literally from seven in the morning till midnight, sometimes one in the morning, to create nearly a hundred plates now on exhibition in the Ethnographic Museum. It should also be remembered that the whole project couldn’t have been created without the priceless help of the Museum, Teodora and Izydor Gulgowski Kashubian Ethnographic Park in Wdzydze Kiszewskie.

When the exhibition was finally up, we realised that we had a collection of images that was probably more interesting and more important than we had originally thought, a collection that was worth of being published in the form of an album. And thus the first album in Poland (and probably not only in Poland) containing only ambrotypes was created, enriched with a text inspired by Gulgowski’s story that I had the pleasure of writing and with a fantastic introduction by Krzysztof Jurecki.

Below you will find a few images from the project. All of it can be found in a bilingual album that can be purchased here: http://alternativephotographicsupplies.com/wesele-kaszubskie-wg-i-gulgowskiego 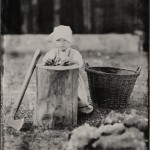 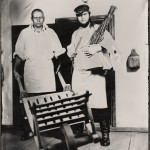 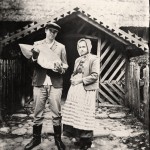